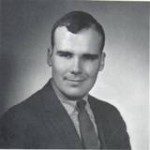 I began my teaching career at MWCC in Sept. of 1967, hired as an instructor at a salary of $6,200 per annum. When I retired in 2002 after thirty-five years of service to the College, I was a “Full” Professor [though what I was full of varied, depending on who was asked] and earning considerably more than I was in 1967.

I’m daily grateful for having been given the opportunity to teach, for it’s a truism beyond contradiction that if one desires to learn something, one should try to teach it; however, when I arrived at the old Elm St. campus that September, I was twenty-eight, had never taught and was scared to death of making a complete fool of myself.

Someone once said that teaching is like making love: no one teaches you how to do it, but when the time comes, you’re expected to know how to perform. Well…it’s a learning process in both instances. I gradually did learn how to teach, primarily through a careful self-monitoring and by listening closely to my students. I remember making a conscious decision to try to be a better teacher than any I had ever had myself. It was never easy. Teaching is hard intellectual and physical work [35 years of correcting papers and exams and countless hours of studying and preparing lectures in one’s discipline…] and anyone who disagrees is either dishonest or a slacker—or both.

I was hired to teach English…and I did for all of those 35 years. In the main, I taught English Composition I and II [the latter comprising an introduction to literature]. I also taught: Speech, Survey of American Literature, I and II, and Honors English. Additionally, I created and taught Survey of English Literature, The 19th Century American Novel, The 20th Century American Novel, Short Story I and II, and Survey of Greek Art [after earning a Master’s Degree in Art History in 1989].

But perhaps the courses I’m most proud of having created [with Yoav Elinevsky] are The Holocaust and an Honors seminar on Genocide in the 20th Century, courses I’m most disappointed to see have been dropped from the curriculum.

For twenty-six years I also taught courses in the Division of Continuing Education every semester, and at least one course every summer; I taught these courses in Gardner and at the following MWCC satellite campuses: Ft. Devens [before and after the Army left], Athol High School, Digital Equipment Corp. in Westminster, and at the middle school in Leominster.

In retirement I reflect from time to time on all those years and on the thousands of interesting people who came into and out of my life. I sometimes find myself in those moments doubting my efficacy as a teacher; perhaps that is only natural, a human desire to believe that my lifework was worthy and effective—that whatever influence I had in their lives is positive and enduring.

But a teacher cannot dwell for long in such a region of uncertainty and must find his peace in the knowledge that he tried his best, cared deeply about his students’ progress, and was passionate about the power of language to lead us to self-knowledge and to empathy.

I don’t dwell for long on these things, however, for they are a part of the past…as am I. Moreover, since I retired from teaching, I’ve discovered that I, too, have other lives to live.