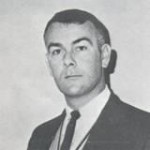 During the 1997 Commencement Ceremony, John ”Jack” Leamy, Jr. was honored for his years of service by being appointed to Professor Emeritus Status. The May 22, 1997 Resolution appears below.

WHEREAS, we honor Professor John H. Leamy, long-time teacher, highly respected by his colleagues for his knowledge of literature, admired by his students for his passion and his concerns about their progress and his willingness to help; and

WHEREAS, we pay tribute to Professor Leamy for thirty-two years of service, always committed to excellence in teaching and willingness to perform tasks that go beyond what could reasonably be expected; and

WHEREAS, we acknowledge that Professor Leamy has served as an inspiration and mentor to faculty and students; and

WHEREAS, Professor Leamy has distinguished himself by his keen interest, commitment, and loyalty to his students and colleagues, and the mission of Mount Wachusett Community College;

BE IT THEREFORE RESOLVED, that Professor John H. Leamy, Jr. be appointed Professor Emeritus of English at Mount Wachusett Community College with all rights, privileges, and responsibilities attendant to his appointment.