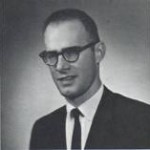 My two greatest accomplishments at the College were producing the College’s first accreditation report. In those early days at the College there were few guidelines or formats to follow with very little professional secretarial support or reproductive machines to do the work (no ZEROX in those days). I had to gather all the data and put it into a workable format so it could get approved by the NEASC (my wife provided the secretarial support for the project and the College outsourced its reproduction). We were successful on our first try and were one of the first Community Colleges to win a 10 year award. My format became the basic model for other Accreditation Committees to follow.

My second greatest accomplishment was holding together and supporting a diverse division during the early years of rapid growth and development. I had great faculty to work with and in the early days when we were a small band of brothers and sisters there was great coordinators like Profs Ialenti, Willhauck and Trainor, it made my job easier. The support services from the Registrar’s office and Don Knower in the reproduction services department also made my job easier. They were a great gang to work with and I miss them all today.

I enjoyed teaching and performing in the classroom where it became my great stage of theater. I was very pleased that many of my students went on to senior colleges and universities which led them to successful careers on their part.