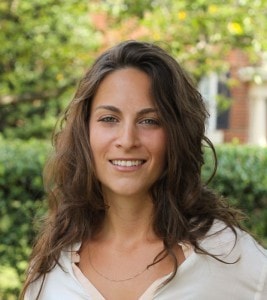 Chevenee Reavis, director of strategic initiatives for the global, nonprofit organization Water.org, has been named Mount Wachusett Community College’s 2014 Alumna of the Year.

We are delighted to welcome Chevenee Reavis back to Mount Wachusett Community College as our 2014 Alumna of the Year,” President Daniel M. Asquino said. “She arrived on our campus as a teenager with a thirst for knowledge, so it is fitting that she now devotes her time, energy and talents helping quench the thirst of those in need around the world. She truly is an inspiration.”

She recently co-led an innovative multi-media campaign that includes the celebrity-studded, comedic online “toilet strike,” which features Damon, U2 front man and philanthropist Bono, actresses Jessica Biel and Olivia Wilde, Virgin Group founder Sir Richard Branson, and others raising awareness to the cause by pledging to “not to go to the bathroom until everyone in the whole world has access to clean water and sanitation.”

In January 2013, Reavis scaled Mount Kilimanjaro in Tanzania with fellow advocates, educators, musicians and celebrities during Grammy-nominated musician Kenna’s annual “Summit on the Summit” to further advocate on behalf of the 2.5 billion people worldwide affected by the water crisis.

Reavis said she is thrilled to be selected for the award and for the opportunity to return to MWCC for commencement.

“I felt so comfortable at the Mount. It was a community that cared about my advancement,” she said.

Raised in a military family and a former resident of Ayer, Reavis came to MWCC in her junior year of high school. She credits a guidance counselor at Ayer High School for introducing her to the dual enrollment program, which was a pivotal opportunity in her life.

“The decision to attend Mount Wachusett clearly changed my path. As a result of my time there, I transferred to Emerson College in Boston. I consider it to be a really important part of my story.”