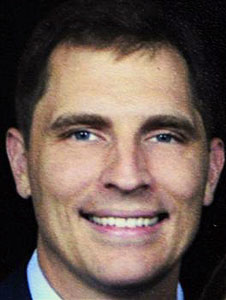 A native of Bolton, Mass., Mr. Brown graduated from MWCC in 1992 with highest honors, then continued on for his bachelor’ and master’s degrees, served the country in the military, married his college sweetheart and became the devoted father of three beautiful children.

He achieved the rank of major in the U.S. Army Reserve and proudly served the country in Bosnia, the Gulf War, and in Iraq during Operation Iraqi Freedom. Last year, the 37-year-old was serving as an intelligence officer with the CIA during Operation Enduring Freedom in Afghanistan. On Dec. 30, 2009, Mr. Brown and six other agents lost their lives in an attack by a suicide bomber at Forward Operating Base Chapman in the Khost Province. They have been commended as American heroes by President Barack Obama, CIA Director Leon Panetta, and other national leaders, as well as by their own hometown friends and neighbors.

“Harold Brown came to Mount Wachusett Community College in 1990 as a teenager still discovering his own potential and direction,” said college President Daniel M. Asquino. “When he graduated two years later, he left as a leader and a scholar. He went out into the world ready to embrace every opportunity that came his way, while never forgetting where he came from or the importance of serving and inspiring others. He truly exemplifies the best of humanity and we are so very proud and honored to recognize him as our 2010 Alumnus of the Year.”

Although Mr. Brown was not one to seek accolades, his parents said he would be proud to be named MWCC’s Alumnus of the Year. He entered the college as an “average” student, they said and quickly excelled.

“He loved Mount Wachusett Community College,” said his father, Harold E. Brown, Sr. “It became a second home to him and opened his eyes to the world. It was such a growing experience for him. From then on, he excelled in everything he did.”

“The most important things in his life were God, family and his country,” said his mother, Barbara Brown. Known for his positive attitude, infectious good nature, and self-deprecating humor, he often greeted friends and colleagues with the expression, “Is this going to be a good day or a great day?” she said.

While at MWCC, Mr. Brown served as a senator on the Student Government Association, was a member of the Phi Theta Kappa international honor society and treasurer of the Criminal Justice Club. He was named to the Dean’s List his final three semesters and graduated with highest honors. He was nominated to the All-USA Academic Team sponsored by PTK and USA Today and was named to Who’s Who Among Students in American Junior Colleges. An affable student who was always willing to lend a hand, he served as a peer tutor and assisted the college’s recruitment efforts by participating in several marketing campaigns.

“He was a very active student on campus and really contributed to the life and spirit of the college community back then, and he continued on his path of wanting to help others and be of service to others,” said Executive Vice President Ann McDonald, who was his advisor at the time.

“If somebody asked, ‘Who were the nicest, greatest students you would just love to put on a pedestal?’ he would be one of them because he worked hard, he did a nice job and was the most personable guy you could know. He had it all, yet presumed nothing and didn’t look for attention,” she said.

In an essay Mr. Brown wrote in 1992 while preparing to transfer to one of several private colleges and universities that offered him significant or full scholarships, he expressed his appreciation for Mount Wachusett and the experiences he gained as a student.

“During the past year and a half attending a community college, I have had many educational opportunities,” he wrote. “However, there is a part of a college education that many people overlook, and in my opinion, is one of the most important parts of the college experience. It is the personal interaction with my college ‘family’ which in my case, includes an extremely diverse student body and the faculty…I leave knowing that I am a more educated person for having been a part of this type of a community. I also leave knowing that I have a strong base in which to support the rest of my college and life experiences.”

He brought “to the classroom a smile and a curiosity for knowledge,” and “a positive and caring attitude toward learning and his fellow students,” remarked his former computer professor, Ray Rogers, in a recommendation letter.

Mr. Brown graduated from Nashoba Regional High School in 1990. After earning his associate degree in Liberal Arts from Mount Wachusett, he received a scholarship to George Washington University in Washington, D.C., where he earned a bachelor’s degree in Political Science. He went on to earn a Master’s of Business Administration from the University of Phoenix.

At GWU, he met his wife of 15 years, Janet Dill Brown. The couple made their home in Fairfax, Va., with their three children, Paul, Lena and Claire. Mr. Brown’s sister Regina Brown of Clinton is an alumna of MWCC, and his sister Paula Rich of Bolton attended the college.

While at George Washington, Mr. Brown served as an intern in the office of former Congressman Martin Meehan of Lowell. After graduating, he went on to Officer Candidate School and was commissioned as a second lieutenant in the Army. Prior to embarking on his career in public service, Mr. Brown worked with Shareholder.com in Maynard and in England for SAIC, a Virginia-based defense contractor. An avid runner, skier and fitness enthusiast, Mr. Brown enjoyed traveling and had been to six of the seven continents. He was a member of the Knights of Columbus in Virginia.

Growing up in Bolton, a town of about 5,000 residents, Mr. Brown often saw his parents helping others and adopted the philosophy of helping your neighbor. Harold Brown Sr. serves his community as the public works director and formerly served as a Bolton police officer and volunteer firefighter and ambulance attendant. Barbara Brown retired in 2004 after a 25-year career as a Bolton police officer and continues to volunteer as an elected constable, ambulance attendant and member of the Council on Aging.

In a letter to CIA employees following the December attack, President Obama stated that the seven agents came from a “long line of patriots” whose courageous services has helped to thwart terrorist plots and save lives. “The men and women who gave their lives in Afghanistan did their duty with courage, honor and excellence, and we must draw strength from the example of their sacrifice,” President Obama said.

In June, the agents will be honored with a star on the Memorial Wall at the CIA’s headquarters in Langley, Va., “alongside so many other heroes who gave their lives on behalf of their country,” the president stated. “And they will live on in the hearts of those who loved them, and in the freedom that they gave their lives to defend.”