Venture Teams at Montachusett Regional Vocational Technical School (“Monty Tech”) have much to be proud of after the school’s completion of its second year with UWYV. All of Monty Tech’s Venture Teams took advantage of the school’s plentiful resources to assist homeless shelters in the area. While each Venture supports similar organizations, the students channeled their talents into a variety of professional fields and disciplines within the school. Thanks to the tireless efforts of their Champion, Monty Tech Teams had the opportunity to pitch their Venture ideas to Massachusetts Senator Jen Flanagan, who voted to launch both teams unconditionally.

Appreciate the Arts
Appreciate the Arts Venture Team was started by Isabella and Gage, two high school students at Montachusett Regional Vocational Technical School in North Central Massachusetts. While they love having the flexibility to learn a trade as well as academic subjects during the school day, they felt that access and opportunity to arts-based activities was lacking in their school community. Appreciate the Arts Youth Venture is an organization that hosts arts events at their school for students, faculty, staff, and outside community members to participate in. In an effort to keep their Venture sustainable, they plan to recruit local artists to donate their work to silent art auctions, host talent shows for individuals to enter and charge admission, and to sell t-shirts and refreshments for profit. Isabella and Gage are hoping to create more opportunities for young people to participate in the artistic endeavors they love.

Helping the Homeless
While visiting a local homeless shelter, members of Helping the Homeless noticed the lack of available space for children to do their homework. In order to fix this, the Venture has teamed up with the woodworking shop at their school and has made plans to create a functional homework help kiosk for the shelter. In addition to the space itself, the team plans to make monthly visits and provide tutoring assistance to any children who may be at the shelter. By creating this safe learning zone, the team hopes to give homeless children confidence and an environment to academically thrive.

Horizons for the Homeless
Students at Montachusett Regional Vocational Technical School saw the perfect opportunity to combine their passion with helping a community they knew needed assistance. The Venture Team, Horizons for the Homeless, joined forces with the cosmetology department at their school and with Horizons for Homeless Children, a local nonprofit organization dedicated to improving the lives of young homeless children and their families by ensuring that they are prepared for school success. The Venture offers low-cost haircuts, coloring and mani/pedicures to the public, with proceeds of each appointment going towards Horizons for Homeless Children. The Venture’s continued efforts not only assist the shelter but also give community members surrounding the school the opportunity to boost their confidence without hurting their wallets. Monty Tech Cares
The men of Monty Tech Cares knew that it was not just enough to help the community here and there, but instead to make it a systematic part of the school’s mantra. Their venture establishes an annual day of service for the students of Monty Tech to come together and help a part of the community in desperate need. This year they worked with the Interfaith Hospitality Network of Fitchburg to help repair the areas of the building that had fallen to neglect.

Chasing Dreams
Inspired by a love of theater and how it has helped them in their own lives, the Venturers of Chasing Dreams are excited to share this passion with local elementary students. Through their venture, these students will be bringing the theater to the students, engaging them as performers in their own shows and hopefully inspiring them to continue to do theater later on.

Colorful Change
Motivated by one of their teammate’s experiences through the foster care system, this Venture Team has decided to take action and work towards creating a better support system for the foster youth of North Central Massachusetts. In order to raise money for this cause, the team has decided to host their very own color run and have the proceeds go towards foster care programs such as the Department of Children and Families. On April 23rd, 2016 at Monty Tech’s outdoor track in Westminster, “Colorful Change” hosted a Color Walk/Run to raise awareness and funds for their cause and received through donations over $2000.00 for children in foster care.

(Saving) The Bee’s Knees
This Venture Team knows just how great the decline is in the honey bee population. And they’re determined to do something about it. Their mission is to raise awareness about the effect a continuing decline in population will have on food and on people. They host a Honey Festival in the spring and a Farmer’s Market in the summer. These events will help to raise awareness, but will also raise funds to support larger efforts committed to the same cause, such as Burt’s Bees and the Haagen Dazs’ Honey Bee Haven.

Thoughts for POTS
Having seen firsthand the difficulties of their teammate experiencing Postural Orthostatic Tachycardia Syndrome (POTS), students at Montachusett Regional Vocational Technical School wanted to raise awareness and education around the syndrome. POTS is a form of dysautonomia that is estimated to impact between 1,000,000 and 3,000,000 Americans and millions more around the world. Like many others with POTS, it took Victoria a long time to get diagnosed due to the lack of awareness and research going to the illness. Her two teammates have seen her pass out, be unable to speak, and felt the scariness of not knowing how to help, so these three students set out to solve the problem and launched their Venture, Thoughts for POTS. Their goal – an educated community around them, future patients getting faster and more accurate diagnosis, and ultimately, a cure. 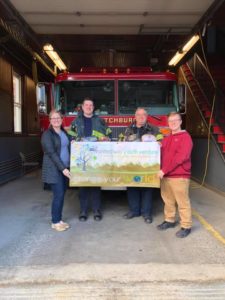 Two senior boys from Monty Tech realize how much firefighters sacrifice during the holidays by being away from their families when they are scheduled to work. These students raised money and sponsorships to be able to bring hams and pies on Christmas to every single firehouse in the cities and towns in the Monty Tech district.

Animal Lovers Association
This Team is passionate about animals. They help find homes for animals in shelters, and provide lots of love and attention in the time they are in the shelters. They host “Adoption Days” and “Puppy Days” where they have several pets for adoption and days that teachers in their school bring their own dogs in for students to spend time with and have pictures taken.

Survivors Adelante
Survivors Adelante is dedicated to bringing resources; such as first aid, school supplies, and non-perishable foods to Puerto Rico. The primary inspiration for this venture is Hurricane Maria, which devastated the island in September of 2017. The island is still struggling to get everything back up and running. Each member of this Team has direct ties to Puerto Rico, most of them include family. They partner with Mahar High School, providing Mahar with supplies to bring during their service trips to Puerto Rico.

Give Hope to Fosters 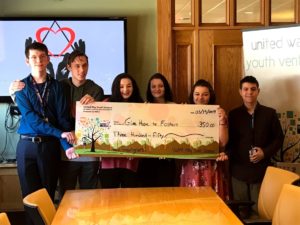 Each of the members of this Venture Team have a personal connection to a foster care experience—either directly or through a loved one. This knowledge drove them to plan fundraisers and donate clothes, food, water, and toys to the MA Department of Children and Families for the most vulnerable in our community.

UNITY
This team of Monty Tech students has individually experienced racial “jokes” and other insensitive comments. Their goal is to bring greater awareness to their school community, which consists of students representative of 19 towns and cities across North Central Mass, that racism is not acceptable and to teach their fellow youth how to be more sensitive and empathetic to people who are different from them. They will accomplish this goal by fundraising to bring in a skilled special speaker to address the issue school-wide.