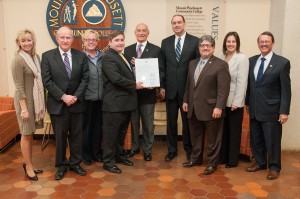 Area lawmakers traveled to Mount Wachusett Community College for a legislative breakfast on Wednesday, Nov. 6. Following the meeting, the North Central Massachusetts delegation presented a resolution congratulating the college on its 50th anniversary.  The resolution notes MWCC’s growth and academic excellence over the past five decades, as well as its leadership in the areas of civic engagement and renewable energy.  MWCC was established in Gardner on Nov. 8, 1963 as one of the first eight of 15 community colleges in Massachusetts.