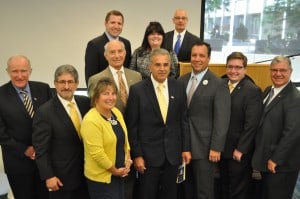 These were among the words and phrases used by area legislators, mayors and business leaders to describe retiring Mount Wachusett Community College President Daniel M. Asquino during a breakfast sponsored in his honor by three regional Chambers of Commerce.

More than 200 business and community leaders gathered June 24 in the college’s South Café to toast, and occasionally roast, the long-serving president, who has announced his plans to retire in early 2017 following three decades at the helm of the college and 47 years in Massachusetts public higher education.

“Dan’s resume is long and is far reaching, not only in North Central Massachusetts, but throughout the Commonwealth and in higher education nationwide,” said retired State Sen. Stephen M. Brewer, who served as master of ceremonies. “He is a visionary leader whose emphasis on community engagement and collaboration has left a continuing legacy.”

The president was lauded for his leadership in key areas, including championing access to higher education; K-12, business and industry and community partnerships; civic engagement; and sustainability.

State Sen. Anne Gobi and State Rep. Jon Zlotnik shared remarks on behalf of the region’s legislative delegation. Additional speakers included Gardner Mayor Mark Hawke and Leominster Mayor Dean Mazzarella, who are both alumni of the college; Fitchburg Mayor Stephen DiNatale; Raymond LaFond, senior vice president at Enterprise Bank, who spoke on behalf of the college’s Board of Trustees and Foundation Board of Directors; and Jim Bellina, president of the Greater Gardner Chamber of Commerce.

Bellina, along with Nashoba Valley Chamber of Commerce President Melissa Fetterhoff and Roy Nascimento, president of the North Central Chamber of Commerce, presented Dr. Asquino with a $1,000 donation to the MWCC Foundation for the newly created Class of 2016 scholarship fund.

“Thank you, President Asquino, for giving us leadership by example,” Bellina said.

Senator Gobi shared a story of working with determined MWCC students on a legislative bill focused on consumer protection as an example of the president’s impact on encouraging young people to become engaged citizens. “Students and the community. That’s something that President Asquino has never, ever forgotten.”

President Asquino acknowledged that there is still much to do during the remainder of his tenure, including completing construction of the college’s $42 million science and technology building and campus renovations. “My focus right now is on Mount Wachusett Community College.”

He said he is most proud of the service provided to students by the college’s faculty and staff, the college’s economic impact on the region, and leadership in academic, workforce and community endeavors.

“Thank you for giving me the opportunity to serve you and to achieve my dream,” President Asquino said. “I certainly will miss all of you. I’ll miss the opportunity this position has given me to give back.”