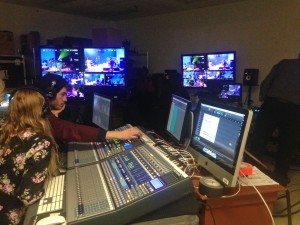 When the Boston-based band The Wicked Hangin Chads recently took to the MWCC theatre for a free show, they did more than entertain the audience with two hours of reggae fusion and flow art dancing. They provided an opportunity for Media Arts and Technology students to hone their video and audio production skills.

While the band performed its original music in several languages on Saturday, May 14, a crew of students, guided by Professors John Little and Joel Anderson, discretely recorded the event using eight video cameras set at various angles, synchronized to two 48 track audio recorders capturing 35 audio sources. The recording will be edited and released as a half-hour show for cable television and the band’s promotional efforts.