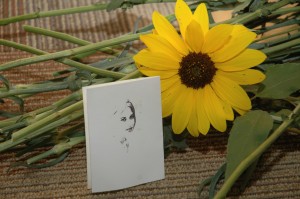 MWCC’s Center of Excellence for Veteran Student Success, together with members of the student Veterans Group, hosted the Remember to Remember 9/11 Memorial on Tuesday, Sept. 11 at the Gardner campus to honor and reflect on those who lost their lives in the attacks in 2001. Remember to Remember is a silent memorial, except for the reading of the names of the nearly 3,000 victims.

Members of the college community as well as the public stopped by throughout the three-hour memorial to place a white daisy or carnation at the base of a flagpole. MWCC Natural Resources major Jacqueline Richard placed a sunflower at the memorial in remembrance of her friend, 1995 alumna Carrie Progen, who was among the World Trade Center victims. Richard, who initially attended MWCC in the mid-1990s, also placed a portrait at the memorial that she had created of Ms. Progen when the two took art courses together. “That’s how much she stood out.”

A commemorative flag and a piece of art work created by Ms. Progen are on permanent display at the college.

As part of the event, members of the Patriot Riders arrived to display a flag at half-staff before proceeding to MWCC’s Devens campus for a remembrance there.

The Remember to Remember memorial was founded by local artist and poet James Pelletier of Winchendon, who organized the recordings in collaboration with the NY-RFB&D and The Pentagon and served as a volunteer at Ground Zero in the wake of the 9/11 attack.