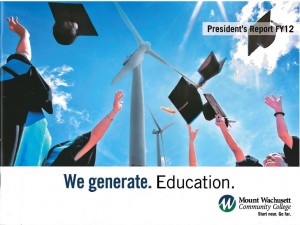 The National Council for Marketing and Public Relations, District 1, has awarded three Medallion Awards for excellence in communications to Mount Wachusett Community College. The awards were announced on Oct. 21 during the District 1 annual conference in Mystic, CT. Nearly 300  entries were submitted in 40 categories.

MWCC’s Marketing & Communications division received a gold Medallion Award in the General News/Feature Story category for “A Dollar and a Dream,” a feature article about media executive and MWCC alumnus Robert Regan, the 2013 commencement speaker. The article appeared in the college’s HIREed magazine and The Sentinel and Enterprise.

NCMPR’s District 1 encompasses community colleges in the eastern U.S. from Maine to the District of Columbia, as well as the maritime provinces of Canada and the United Kingdom. An affiliate of the American Association of Community Colleges, the NCMPR is the only organization of its kind that exclusively represents marketing and public relations professionals at community and technical colleges.