Mount Wachusett Community College ranked number four across the country in the Best for Vets: Colleges 2017 rankings for 2-year colleges conducted by Military Times, an independent news and information source for service members and their families. MWCC, continuing its long-held commitment to veterans and their families, moved up two spots from its 2016 rank. […] 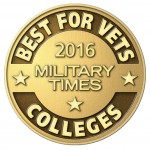