The Board of Trustees of Mount Wachusett Community College voted unanimously to approve the recommendation of Thomas Matsuda for Emeritus status.

Matsuda is a master sculptor and multimedia artist who specializes in Buddhist iconography. He began his formal studies as an artist at Pratt Institute and as a lithographic printer in New York. His work was in abstract drawings, paintings, and prints, influenced by Eastern Philosophy.

His interests in Eastern philosophy led him to accompany a group of Japanese Buddhist monks on a Peace pilgrimage that involved walking across America for six months and an additional six months living with the Dine (Navajo) in Arizona. He traveled to Japan where he lived for twelve years, during which time he apprenticed under sculptor Koukei Eri and lived in a remote mountain village where he honed his skills sculpturing in wood and stone.

A prolific artist, his work includes two hundred sculptures in Japan for various temples, shrines, villages, businesses, and individual patrons. He has been an artist-in-residence in Latvia, Japan, and Romania with public art installations and exhibitions in those countries as well as throughout the US including a seven-ton marble Buddha for the Grafton Peace Pagoda in Grafton, NY.

Matsuda came to MWCC in 2005, and his impact on the growth and success of the Art program and its students cannot be understated. He brought stone and wood carving into the sculpture curriculum and advanced techniques used in classroom bronze casting. He served as the Art department chair for a number of years and has been a mentor and advisor to countless students. He was also an exceptional advisor to the MWCC Art Club and hosted the annual bronze pour.

He initiated several service-learning projects with the MWCC art students, bringing art into the streets and across our campus. His students created mural projects around Gardner, painted repurposed ski lift chairs into park benches, and decorated utility boxes across the city.

“Tom will always be remembered for how he connected our art program with our communities and beyond,” notes MWCC President James Vander Hooven. “As he retires from teaching, he will continue to make an impact through his art as he explores themes of nature, peace, and global culture.”

Full recognition of Tom’s accomplishments and Emeritus Status will also be presented during the 2021 Virtual Commencement Ceremony on May 19, 2021. 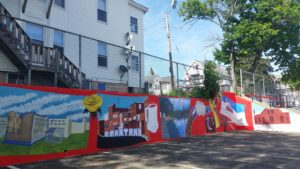