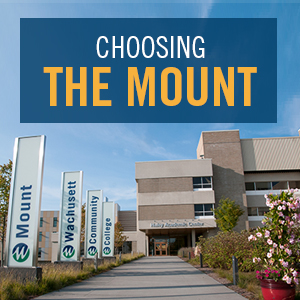 My name is Michael Young and I’m here to tell you what The Mount means to me. My gray hair and pony-tail may make me seem like a student of the Willie Nelson School of Music, and I just turned 76 years old May 15th. This very week would be my 50th Reunion at Princeton. Yet I’m here to graduate with you. Let me tell you a bit of my story and maybe you’ll see why.

A song by folk singer Joni Mitchell speaks of the cycles of life. She says “And the seasons they go ‘round and ‘round. And the painted ponies go up and down. We’re captive on a carousel of time. We can’t return we can only look behind from where we came and go ‘round and ‘round and ‘round in the circle game.” While my graduating from the Mount completes a cycle. You see, I began my academic career at Yakima Valley Community College in 1960 after returning from Operation Crossroads Africa, which served as a prototype for the Peace Corps.

Like the Mount, YVCC was a good place to start in my hometown, Yakima, Washington. From there I truly did go far. First, in 1962, I transferred to Whitworth College in Spokane, a four-year liberal arts school. That would be the year before the founding of the Mount in 1963. Though my major was biology, I had an opportunity to be exposed to drama, music, philosophy, psychology and French. The gift of a liberal arts education is not that it teaches you what to think but how to think.

In West Africa, I saw sickness and poverty firsthand. It convinced me that while religion was important, my goal was to heal the whole person, body, heart and soul. While I had originally intended to go into medicine, the break- up of my parents had convinced me that there was more than just physical pain. Emotional distress can be at least as painful, if not more. Upon graduating Whitworth, I was accepted to Princeton Seminary, where I received a Master’s degree in pastoral counseling.

So, the curve of my educational cycle started at YVCC, then to Whitworth and on to Princeton, going from a small community college to the Ivy League, which shows you can start locally and go anywhere. While Princeton was tough, in comparison, I found the Mount’s academic standards are high! If I can do it, you can do it.

Next, the curve of my professional life started in a Presbyterian Church, then to a college coffeehouse in Bloomfield New Jersey. In the late 60s and early 70s, the young people I served were going through a cultural crisis. Traditional values and the impending Vietnam era draft left them struggling to find meaning. Many turned to drugs and alcohol. My approach at the coffeehouse and in local parks was to engage, educate and inspire them through music, films and the arts. Conversation and counseling could then guide them to find their own path. 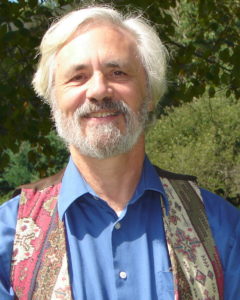 With the current opiate crisis, our seemingly endless wars, and the divisiveness in our current society, it seems like we have come full circle. The twenty-teens look a lot like the 1960’s & 70’s. Yet what my coming to the Mount has shown me is that we have the means and the motivation to address our issues. I have had a chance to update and polish my skill set, to study with inspiring teachers, and to share in class with students who treated me with respect and appreciation. During Creative Writing class, I even became a figure in a short story. And I got confirmation that I could write. For older adult students who have returned to finish an interrupted education, or for those wanting to change careers, I say “if I can do it, you can do it!”

My personal spiritual search, looking for meaning and answers, forms another cycle. From Presbyterian pastor I went to Quaker peace advocate. Yoga and meditation gave me tools to center and deal with stress. Not long ago, I had to be quiet about my spirituality because it seemed too strange or foreign. Now, at the Mount in Complementary Health Care classes, I learned a holistic approach where I did not need to compartmentalize my ideals from my everyday life. My spiritual tools could help people in recovery or dealing with grief or plagued with stress or suffering from PTSD.

While I was still a pastor in New Jersey, I helped create one of the first local Earth Day celebrations. Ecology was not only important to me personally, it seemed essential to save the planet on which we live. Native American teachers have taught me respect for the Earth and that all people are my relations. Our whirling wind turbines at the Mount demonstrate the viability of clean energy. We are not Don Quixote, tilting at windmills. As one who is concerned with the environment, what the Mount means to me is “We can do it!”

As for the circle of my own professional careers, I have been a pastor, an addictions counselor, a hospice chaplain, a private therapist and a veteran’s counselor. I have had the pleasure of seeing some of my vet clients take advantage of the educational services of the Mount. The classes I chose have been in some of the areas in which I already have work experience. Only they took me deeper, gave me theory to support my practice, and challenged me to apply what I learned to my personal life. Put simply, they made me, no challenged me, to grow. If I can do it, you can do it.

After commencement, what is my next professional step? I don’t know. What I do know is that the word “commencement” points to a beginning, not an end. While here at the Mount, I have been encouraged to finish my memoir. Yet I have some resistance. When I write the last words, does that mean I’m at the end? Am I truly finished with my work, my life? No, for I have discovered that I have more chapters to write, more living to do. How about you?

Having lived 76 years and walked this varied, surprising path, with all its twists and turns, I would say again to you “If I can do it, you can do it.”

About the Author: Michael R. Young is a 2018 graduate with a Certificate in Complementary Health Care and a  contributor to the MWCC literary magazine A Certain Slant.