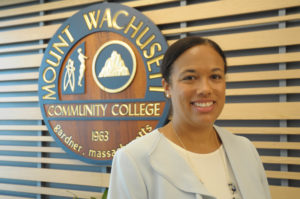 Gaynor is a Lunenburg resident who works as a school nurse in the Marlborough public school system. She also currently teaches at HealthAlliance Hospital in Leominster. She is a self-described collaborator and communicator and said she hopes to bring a healthcare-centered perspective to her role as a trustee.

“A community college is able to give access to students who otherwise would not get access and reach them at a younger age to get them interested in college,” said Gaynor.

She explained that with the rising age of the baby boomer generation and advances in medical technology set up healthcare to continue to be a growing, in-demand field. She views community colleges as able to address the continuing staffing needs of the healthcare industry.

Gaynor said her interest in giving back to the college extended from her time spent on campus as a student. She received her Associate’s Degree in Nursing from MWCC in 2006 before going on to receive her Bachelor of Science in Nursing from Fitchburg State University in 2014. She says that her first-hand knowledge as a student and nurse will help guide her input as a trustee.

“I wanted to give back and pay back what I received from this institution,” said Gaynor.

In addition to her nursing degrees, Gaynor holds a Bachelor of Science with a Neuroscience Track from the University of Massachusetts as well as a Master of Science with a Concentration in Neuroscience and Behavior from the University of Massachusetts. She earned both of these degrees before pursing her nursing degrees. Gaynor is also currently pursuing her Doctorate of Education in Higher Education Leadership with a Concentration in Teaching and Learning from Regis College.