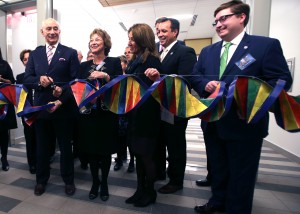 In recognition of President Asquino’s 30 years of leadership at Mount Wachusett Community College, the dedication included remarks from a host of lawmakers, students, and colleagues filled with gratitude and well wishes for the so on to retire leader, a science themed DNA strand ribbon cutting at the entrance and the unveiling of the name of the building to a sparkling cider toast to complete the celebration. 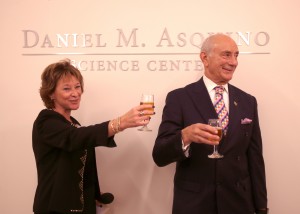 “President Asquino has built deep and meaningful partnerships that have resulted in a college that is extremely relevant and connected to the students and community it serves. Dr. Asquino has been driven by the belief that education is society’s great equalizer and has transformed this college into what you see here today. His legacy will pay dividends for our students and our communities for years to come,” said Tina Sbrega, Chair of the MWCC Board of Trustees.

Dr. Daniel M. Asquino has served as President of Mount Wachusett Community College since August 1987 and is currently the longest-serving public higher education president in Massachusetts.

“This is about access to quality higher education and opportunities for all. It is about the economic and workforce development of this region, the Commonwealth and our nation. It is about equality and diversity,” reflected President Daniel M. Asquino, speaking about the long planning and construction process culminating in this dedication. “These new Anatomy and Physiology, Biology, Chemistry, Microbiology, Earth Science and Physics Labs will replace 45 year old labs which were showing their age. These new spaces which rival those found even in the best elite universities – all combined with our outstanding faculty – allow us to continue a tradition of service and excellence.” 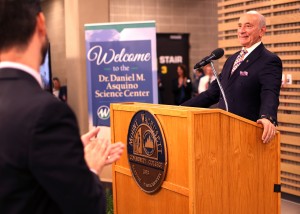 The event would not have been complete without students telling the story of the college through their own perspectives and experiences. Student speakers included Josiah Irfan, who attended Fitchburg High School, and then began at MWCC through the STEM Starter Academy summer program. He discovered his love for computer engineering and hopes to go on the UMass Amherst after completing his Computer Information Science degree at Mount Wachusett Community College.

Liam Scanlon, of Princeton, decided to attend Mount Wachusett Community College as a smart economic decision after having a positive experience with the STEM Starter Academy. He plans to pursue engineering or physics after completing his degree in Liberal Arts.
Ifra Hassan studies Biology at Mount Wachusett Community College and is also a STEM Starter Academy graduate. She recently traveled to NASA headquarters to participate in a scholarship program utilizing Mars rover replicas and hopes to attend Brown University after completing her degree at MWCC.

Mr. Irfan, Ms. Hassan, and Mr. Scanlon all have the opportunity to complete coursework in the Dr. Daniel M. Asquino Science Center and work towards their educational goals in new classrooms on cutting edge technology and lab equipment.

They were joined by several other outstanding MWCC student leaders including Student Trustee Jasson Alvarado Gomez who also serves on the Massachusetts Board of Higher Education and the Massachusetts State College Building Authority and Student Government Association President Faith Kurtz.

“Through science classes at Mount Wachusett Community College I discovered my great passion for Biology. Now, I plan on becoming a doctor and that wouldn’t have been possible without the amazing program here at MWCC,” said Ms. Hassan in her remarks to the capacity crowd.

After more than 18 months of construction and extensive renovations, the anxiously awaited opening of the new science center went off without a hitch as guests enjoyed conversations with student ambassadors, faculty, and staff while touring the new facilities. In addition to the 44,000 square-foot Science Center wing, tours had a clear view of the new 2,300-square-foot greenhouse and renovations throughout the existing Arthur F. Haley Academic Center.
Many construction milestones were celebrated along the way leading up to this momentous day in the 50 year history of the college. On August 11, 2015, the centuries-old tradition of a beam signing was observed to commemorate the completion of the structural phase of a building. During the ceremony, President Daniel Asquino, students, staff, college, community leaders and members of the construction team signed the steel beam that was placed as the uppermost beam as the new building began to take shape overlooking Green Street.

Designed by Boston-based Architerra, Inc. to meet LEED Gold certification for efficiency and sustainability, the new building contains energy-efficient features reinforcing the college’s commitment to sustainability. Over the past 15 years, MWCC has been the recipient of top state and national sustainability awards, including the American Association of College and University Presidents’ Climate Commitment, the U.S. Department of Energy, the U.S. Environmental Protection Agency and the National Wildlife Federation. Shawmut Design & Construction, also based in Boston, acted as construction manager.

MWCC received $37.9 million in state capital funds for the project, as well as a $500,000 grant from Massachusetts Life Sciences for laboratory equipment. The project completed on-time and on-budget.