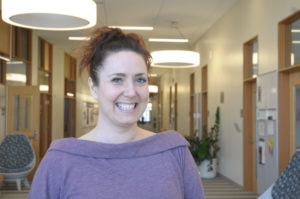 Mount Wachusett Community College Student Cassparina “Cassie” Carlson has been recognized for her dedication and commitment to serving others by being named one of Campus Compact’s national 2019 Newman Civic Fellows Award winners.

“Cassie is a true leader on campus and in her community. She is always finding new ways to get involved and improve the lives of those around her,” said MWCC President James Vander Hooven. “I am so glad she has been honored with the Newman Civic Fellowship. She has been a fantastic member of our community and I know she will continue to contribute in her future career in human services.”

Cassie, a Gardner resident, took it upon herself to get involved at Mount Wachusett Community College when she returned as a non-traditional student in her 30’s. Helping people is just something the United States Marine Corps veteran said is something she can’t help but pursue. Tutoring a classmate quickly grew into involvement with the greater school community.

She is currently a full-time student studying Human Services with the intention of transferring to a four-year institution to pursue a degree in social work. Her long-term goal is to obtain a Masters in Social Work and begin a career at the Veterans Administration as a social worker.

“I would really like to help veterans and military social work makes sense… I was talking with the other veterans and I realized we had a bond,” said Carlson who herself served for four years in the United States Marine Corps where she was a diesel mechanic and obtained the rank of E-5 Sargent. “There were several students that just needed that peer support that you can’t get from just anybody… I realized that if I could do something to help them that I wanted to.”

Carlson was recently nominated to the Phi Theta Kappa All-Star Academic Team, is a work-study student in the Student Life Office where she helps plan campus activities and orientations, and has an internship with the college’s Human Services department.

She helped restart the college’s Human Services Club that raised $400 last year for Wreaths Across America and also sent about a dozen volunteers, organized by Cassie, to help lay the wreaths. Cassie is also a member of the Veteran’s and Allies Club on campus where she has been an active member for several years and currently serves as the secretary.

As if her on-campus achievements were not enough, Cassie also volunteers in her local community as the president of the Gardner High School Booster Club and she is raising five children.

“Cassie is an outstanding student who truly embodies the spirit of the Newman Civic Fellowship. She is engaged and lifts up other’s everywhere she gets involved,” said Shelley Errington Nicholson, the director of the Brewer Center for Civic Learning & Community Engagement.

The Newman Civic Fellowship is a one-year fellowship for community-committed college students from Campus Compact member institutions. Honorees are chosen for their leadership and ability to take action in pursuit of long-term, positive social change. This year, 262 students were selected from Campus Compact member colleges and universities from 41 states, Washington, D.C., Mexico, and Greece.

Through the fellowship, Campus Compact provides a variety of learning and networking opportunities, including a national conference of Newman Civic Fellows in partnership with the Edward M. Kennedy Institute for the United States Senate. The fellowship also provides fellows with pathways to exclusive scholarship and post-graduate opportunities.

Campus Compact member presidents and chancellors are annually invited to nominate one community-committed student from their institution for the fellowship. That is no guarantee that the nominee will receive the fellowship.