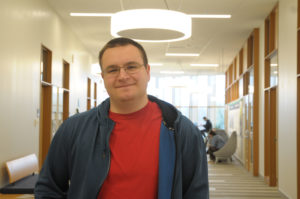 Kurtis Graeff will be graduating on May 23 from MWCC with an Associate’s Degree in Interdisciplinary Studies. What follows is a message from him to the class of 2019.

I want to tell everyone my story. To be honest, it’s not very special and I’m sure a lot of you out there have better tales to tell, but I think that you will all enjoy it.

My name is Kurtis Graeff. If you asked me almost 6 years ago when I graduated from Mahar that I would be going to the Mount, I would have laughed. I held that common misconception that community colleges are inferior to 4-year institutions. I graduated near the top of the class (5th, top boy actually) and naturally knew that I was going to college and yet here I am.

After I graduated from high school, I started to show signs of depression which I had been trying to hide for a while. I ignored it and decided that I wanted to start my long journey by going to WPI, Worcester Polytechnic Institute. When I moved in, I started out doing well. I passed all my classes my freshman year with mostly A’s and B’s. However, I started to abuse my independence. My sophomore year, I made it seem that I was doing well. I pretended that what I was doing was normal, that everyone there was doing something similar. What I was really doing was isolating. I stayed in my room making excuses for professors for missing class. I would lie to my advisors whenever they came to check-up on me. For those of you that are familiar with depression, you might realize that this type of behavior isn’t unusual, but it is unhealthy. Obviously, I ended up failing most of my sophomore classes at WPI and was eventually put on academic probation and later suspension before I was kicked out of WPI.

My family tried to be accepting, but they never really understood why I did what I did, or how I ended up this way. They may not have understood but they loved me enough to let me stay with them to try to figure things out. I decided to come to the Mount almost as soon as I “left” WPI. I thought that a change in environment would help me feel better, that something might be different. My first time coming here, I did just the same that I did at WPI. Soon enough, I stopped coming to classes and was failing all of them again, and once again I was put
on academic suspension. My parents were getting frustrated and I was losing their trust. I knew I had to stop, so I instead worked for some time in a warehouse.

It wasn’t the prettiest job and to be honest, it wasn’t fun. However, it paid the bills. I was already monstrously in debt, over $80,000 to be more specific, and I had nothing really to show for it. Oh, yeah, and I was still depressed. Eventually, my depression got worse and I started to partake in self-harm behavior. More specifically, I was cutting. When all my friends and family noticed, I was hospitalized. Well, technically I was sent to the hospital twice before I finally was facing the fact that I might not be ok. Throughout all of this, Marcia in the admission’s office was constantly checking in. Luckily, my sister and Marcia’s daughter were friends. If they weren’t, I’m sure Marcia would have gone on a tear looking for me. When I finally made my way out of the hospital, I, at first, went back to work. Like I said earlier, it really wasn’t too much fun, so I knew that I wasn’t going to have a satisfying career in the warehouse. I knew that whatever I wanted to do, I would need to go back to school.

When Marcia heard that, my inbox was filled with recommendation and messages along the line of “is there anything I could do to help?” and “what are your plans for the next step?”. I came back to the Mount part-time, trying to work and go to school at the same time. I took one evening class, ASL 101. I was determined to complete the class this time, and I did. I remember that I had class on Tuesday nights, the night that the Admissions office was open late. I would stop in every single Tuesday before class and say hi to all the staff. Eventually, I got to know Marcia and Sarah and Barbara and Sue. Since I know that if I forget anyone I’m going to hear about it, I also got to know Christine, Marcus, Scott, Lisa and Drew.

The following semester I wanted to take more classes, specifically day classes. At first my warehouse job tried to work with my available hours. Soon enough though, they started getting tired of trying to cater around my schedule, so they let me go. But it was ok, it was just the reason that I needed to go back to school full time… Unfortunately, they let me go after the end of the spring semester. I decided to take just one online class over the summer and volunteer with the Athol YMCA. It was at one of my sister’s basketball games that Marcia came to me and asked what I thought about working in the Admissions office as a student ambassador.

At first, I dragged my feet. I never thought of myself as a people person and definitely not an extrovert. I thought I would be caught dead doing something like giving a speech at graduation. She told me about the job, how I would be working in the office, some days I’ll be filing and leading tours, while others I may be covering the front desk. The thing that scared me the most though was when she mentioned that I would be answering the phones and making calls. I am horrible over the phone, especially when I try to talk off the top of my head. But with both my mother and Marcia hounding down my neck, I relented and applied. I guess they saw the diamond in the rough, because I came into the job pretty naturally. At first, I had difficulty making calls and leading tours, but soon enough it became second nature. I was able to take classes full time while working in the admissions office.

Marcia was always like a second mother to me, but now everyone in the office are like my third, fourth, and fifth mothers. Sue, Sarah, Barbara, Christine, Lisa, Jackie, Josie even Scott and Marcus. It was my family away from home. I found something that was missing the other times that I tried to go to school. A sense of belonging. This place became so familiar that I feel comfortable calling it my second home. I’ve gotten to know so many other students that all it takes is a minute walking down the halls before I run into someone to talk to. Classes were no longer hassles that I just had to get through to get a degree, but places I wanted to be to meet someone knew. I’ve come out of the shell that I had created years ago, hiding from the world. This place is where I have become someone who I am happy to be. I’m happy that I finally found something. I’m happy that I got a chance to study something I love. I’m happy that I was a student here at the Mount.

And that’s my story, that’s everything. I told you all that it probably wasn’t that special but I hope that you enjoyed.