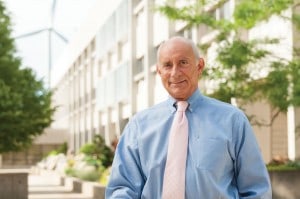 Dr. Daniel M. Asquino has served as President of Mount Wachusett Community College since August 1987 and is currently the longest-serving public higher education president in Massachusetts. Under his leadership, Mount Wachusett has grown exponentially in size, stature and academic services.

Enrollment has grown to over 12,000 credit and non-credit students, satellite campuses have been established in Leominster, Fitchburg, and Devens, and the number of academic programs has expanded to over 75 associate degree and certificate options. During his tenure at MWCC, President Asquino has established the college as a state and national leader in the areas of workforce development and economic development; dual enrollment and K-12 partnerships; civic engagement and service learning; veteran services; and renewable energy and sustainability.

“It has been an honor and a privilege,” President Asquino said in an announcement to the college and greater community earlier today.  “I can say without reservation that is has been a joy to come to work each and every day. For that, I thank the hard-working students, faculty, staff and alumni of Mount Wachusett Community College and our many community partners for their inspiration and support.”

“President Asquino has transformed Mount Wachusett Community College during his time at the helm of this great institution,” said Mount Wachusett Community College Board of Trustees Chair Tina Sbrega. “What was a one-campus college with fewer than 1500 students when he arrived thirty years ago, is today a thriving four-campus college deeply connected to the communities we serve.” Sbrega praised Asquino for his deep commitment to community partners.

“President Asquino really listens to the needs of business leaders, non-profits, K-12 educators and all of the North Central Massachusetts regional partners. Sbrega expressed the deep appreciation for President Asquino’ s leadership on behalf of the Board of Trustees. “We have been so very fortunate to have such an innovative leader as President Asquino,” said Sbrega.

“President Asquino not only cared deeply about his students and the college, but he worked closely with countless community partners to ensure that the college and its offerings were relevant. This entire community is better for his leadership and he will leave a pair of very big shoes to fill.”

He is a charter member of the Massachusetts College Success Campaign, The Democracy Commitment, as well as the American College and University Presidents’ Climate Commitment (ACUPCC).

A nationwide search for a new leader for Mount Wachusett Community College will be conducted under the leadership and authority of the Mount Wachusett Community College Board of Trustees and the Massachusetts Board of Higher Education. During that time, President Asquino will continue to lead the institution to ensure a seamless transition. “I can promise you that I will continue to give 100 percent every day and partner with all of you so that there is no loss in the momentum that has been our hallmark.”