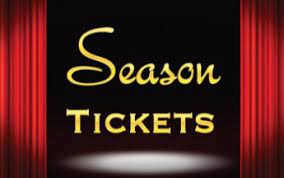 Missed the first show of our 2022 season? Weren’t sure about subscribing until you saw how great “Something Rotten” was? It’s not too late to become a subscriber and enjoy the 3 remaining shows – at season ticket prices!

Save 20% of the regular admission price when you buy “REST OF SEASON 3-PACK” See 3 shows for just $60! (plus shipping and handling)

Don’t Miss the “Rest of the TAM Season!”

THE PLAY THAT GOES WRONG (October)