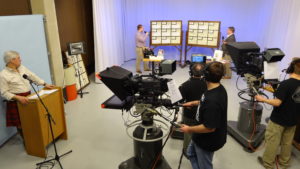 The televised auction, which will run for its 32nd year in the first weekend in March (Friday and Saturday), brings together donated items and services from the community that are auctioned off to benefit the Gardner Rotary Club. All funds raised fund charitable initiatives in the city and greater Gardner region. It can be viewed live online or on Gardner cable channel 9.

The telethon-style auction is produced in the broadcast studios at MWCC. Approximately 25 students and the college’s entire Media Arts and Technology team volunteer their time towards producing the auction.

The Rotary Club of Gardner recently donated $2,000 to the Mount Wachusett Community College Foundation in recognition of the ongoing partnership in producing the Rotary’s annual televised auction fundraiser.